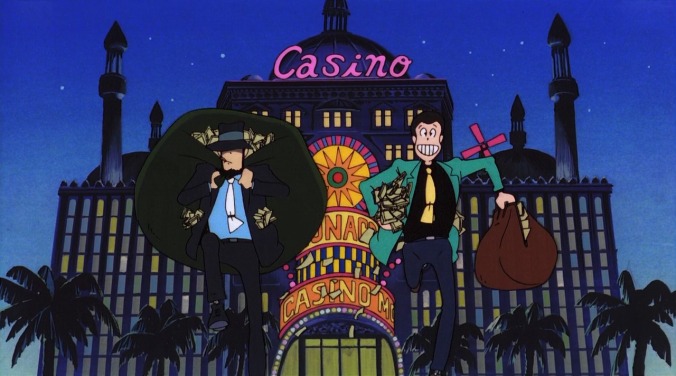 Discotek has recently released Hayao Miyazaki’s feature directorial debut, Lupin III: The Castle of Cagliostro, on DVD and plan on releasing the Blu-ray in a few months. Their release is pretty much the definitive version for US audiences, keeping the opening credits, which were mangled in the 2006 DVD release, intact, and giving us the best subtitle translations yet. The one feature especially appreciated by some fans was the inclusion of the film’s two English language dubs, Streamline’s from 1992 and Manga’s from 2000. Both dubs are imperfect, though not without their charms. Honestly, if you’ve never seen this film, just watch it in Japanese with subtitles, but for the curious and those who prefer dubs, here’s a comparison of the two, because boy, they’re quite different beasts.

The Streamline dub is a nostalgic favorite of many westerners who first saw the film on VHS in the early 1990s and has been described as close to the spirit of the film. It balances the comedic and melancholic elements with relative ease. The majority of the players are good, giving natural line readings. I think writer Daniel Thomas MacInnes put it best when he compared the feel of this dub to the likes of an old radio show. However, I do think that Bob Bergen’s Lupin is weak; he sounds more like an over eager teenaged boy than a man in his mid-thirties, definitely not desirable as Cagliostro portrays Lupin at the twilight of his career and as mildly weary of the thief’s life. Inverse to that, the teenaged Clarisse sounds like a woman in her mid-thirties, far from the ingenue she is supposed to be. 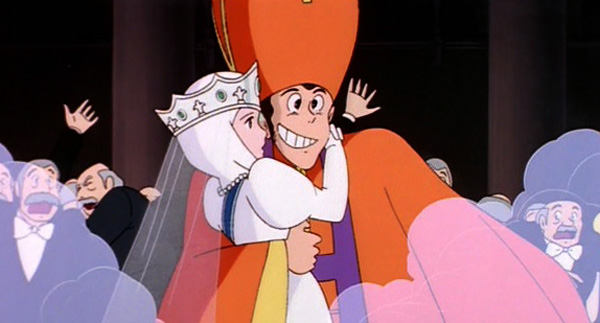 The biggest criticisms this dub receives all relate to how it plays fast and loose with the original script. Details are conjured up out of nowhere. Characters say things which go against their true characterizations or the intent of the scene, but my main peeve with this dub is its utter inability to let a silent moment play out. Emperor Kuzco of The Emperor’s New Groove fame would deem it “the thing that wouldn’t shut up.” Aside from one quiet scene early in the picture, Streamline seems to have been afraid that the audience would be bored should a second go by without audio clutter. If we have two characters in a scene, then anytime one of them is not in a shot, the voice actors chatter away, repeating dialogue already stated or engaging in clumsy ad-libbing. It’s as though they’re afraid the viewer is too stupid to catch some of the film’s subtleties, like when the Count’s wicked henchman Jodo performs the sign of the cross during the arrival of the archbishop and Streamline feels the need to have another character point out, “When did you become so religious?” Anime fan Carl Gustav Horn had plenty to say about this moment in his famous criticism of the Streamline dub:

“Streamline shows their inability to deal with subtlety in the simple screw-up of this line: “Since when did you become so religious?” Did it ever occur to anyone at the office that they might be dealing with a work of film art? Or do they think it’s a 100-minute (geez! 100 whole minutes…) Japanese cartoon that just needs English dialogue slapped across its length like so much whitewash? The wedding-procession sequence is one of the great moments in anime. The sacrament is meant to heighten the realization of Cagliostro’s defilement (Lupin himself makes this point as his “ghost” emerges from under the altar)–it’s chiaroscuro. Jodor’s making the sign of the Cross is an unexpected, understated, yet shocking gesture. There’s a layer even below this: the black robes and hoods worn by the Shadowmen in their honor guard are reminiscent of the Inquisition, a real-life Cagliostro atrocity committed with the utmost piety and approval of Christ’s vicar on earth. The Church is here subsumed into the evil of Cagliostro…”

In contrast, the Manga dub is more faithful to the film… for the most part, but we’ll get to that in a moment. The voice acting here is plenty solid, with David Hayter being the stand-out as a Lupin both cocky and tender; my only complaint is leveled toward Jigen, who’s made to sound like a man in his late fifties when he can’t be that much older than Lupin himself. The biggest beef people have with this dub is the amount of profanity. In fact, Reed Nelson, who runs lupinthethird.com and is the de facto Lupin expert consulted for most of its US home video releases, included an alternate version of this dub on the 2015 DVD, one without all the swearing. I think it’s for the best; while a little profanity is not out of place in the Lupin universe, even in Miyazaki’s lighter interpretation, Manga goes over the top, peppering the script with “bitch,” “shit,” and “bastard” everywhere they can. 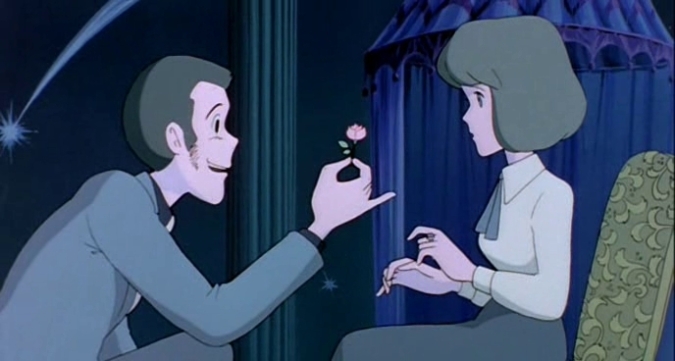 Personally, my big issue with the Manga dub is that, like the Streamline dub, it feels the need to ruin quiet scenes with needless chatter. It’s not as bad, of course, but the problem is still there. We don’t need Lupin explaining his disguise when he crosses the Cagliostro border and we don’t need a joke about interior decorating when Lupin descends into the corpse-filled dungeon beneath the castle either. I get so annoyed by this fear of quiet moments, of letting the audience breathe while the film takes its time. It’s not like these scenes hurt the pacing; if anything, it damages the pacing to eliminate the quieter moments.

People can handle silence, but American films are terrified of boring the audience. Miyazaki brought this up during an interview:

“If you just have non-stop action with no breathing space at all, it’s just busyness, But if you take a moment [of silence], then the tension building in the film can grow into a wider dimension. If you just have constant tension at 80 degrees all the time you just get numb. The people who make the movies are scared of silence, so they want to paper and plaster it over.”

In the end, the best way to go with any foreign film is the original language with subtitles. I’m not partial to either dub, they’re much too noisy for me. Still, it is nice to have options, even if they’re flawed ones.

an ode to dust
tgreywolfe