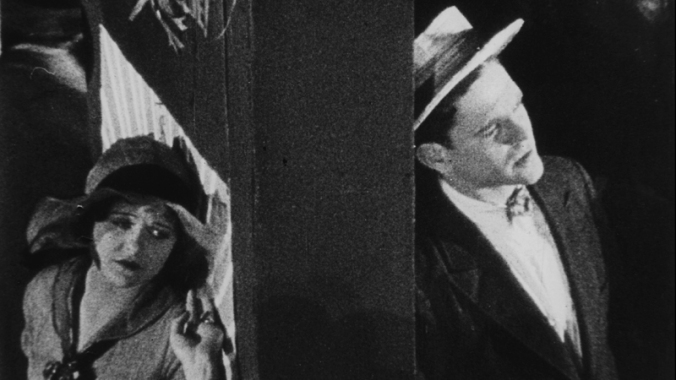 The late 1920s is a fascinating chapter in the history of cinema. 1928 had the silent film right at the height of its artistic maturity, while sound loomed on the horizon. What many have come to call the “part-talkie” is a curious phenomenon of this period. The Jazz Singer was not a 100% sound film, despite what Singin’ in the Rain and your high school textbook’s chapter on the Roaring Twenties claim; it was essentially a silent film with sound interludes, but it did whet the public’s appetite for this new medium.

Paul Fejos’ celebrated city symphony Lonesome belongs to this transitional period, though there’s more of the late silent era in it than the early talkie revolution. If anything, the sound portions of the film show why people thought the talkie was a passing fad: compared to the free-roving camera, frantic action, and vivid acting in the silent portions, the three sound scenes inserted into the film are static and awkward, not to mention completely inconsequential to the story. Judging from the way the charisma bleeds right out of their performances once the sound clicks on, it’s quite obvious the two leads Barbara Kent and Glenn Tryon are uncomfortable with the microphone.

The sound scenes may be stilted, but at least the tinting is still gorgeous.

But the awkwardness of the talking scenes are ultimately forgivable, for the rest of Lonesome is magnificent, one of the triumphs of 1920s Hollywood. The story is simple: two lonely young people stuck in unfulfilling jobs meet during a holiday at Coney Island, fall in love while having a good time, and then nearly lose one another forever amongst the madness of the crowd. For silent film geeks, this all should sound familiar; movies like Murnau’s Sunrise: A Song of Two Humans and Vidor’s The Crowd feature similar stories about people lost in the beauty and anxiety of city life. However, Lonesome is much more optimistic than the bitter-sweetness of The Crowd and less dark than Sunrise. The lion’s share of the picture takes place amidst the frenzy of Coney Island on the Independence Day weekend, just following two ordinary folks riding the rides, eating ice cream, and dancing underneath the moonlight. Combined with the vivacious cinematography and use of montage, the whole thing is a delight to watch, a testament to the power of pure image-based storytelling, supplemented only by a few sound effects.

Kent and Tryon are charming in the leads, both cute but never cloying. Their love at first sight may not be fashionable for some, but the fairy tale feel of the movie allows the audience to buy into their instant affection and make us believe that fate has brought them together. The power of their performances becomes apparent once the two are separated. They whirl about the manic crowd, wondering whether to stay in place or keep on wandering amongst the masses. The tears in Tryon’s eyes as he forlornly gives up the search provoked tears of my own. How many bigger, grander, more melodramatic Hollywood love stories set in ancient times and foreign lands have attempted to wring the hearts of audience with the separation of two beautiful people in love and done so with as much power as this little tale of two working class kids scared to death by the possibility that they’ve lost a potential soul mate? Not many.

It’s films like Lonesome that make me wish the silent era had carried on a little longer. Visually luxurious and emotionally potent without the need for a convoluted plot or cackling villains out to wrench the protagonists apart, it’s a treasure of a film and I’m awfully glad it’s getting the attention it deserves in more recent years.