Steamboat Bill Jr. is Buster Keaton’s final independent film, though not necessarily the last one in which he had creative control. His first work with MGM, The Cameraman, could be said to hold that title, so when you watch Steamboat Bill Jr. there is not the same sense of the bittersweet you may get when watching Keaton’s final 1928 masterpiece. However, there is something grand about Steamboat Bill Jr., not just in its dazzling final hurricane sequence, tight sense of plotting and structure, or Buster’s increasingly creative pratfalls, but in the emotional heart of the story, young Willie Canfield’s efforts to simultaneously please his father Bill Sr. (Ernest Torrance) and be with his college girlfriend, Kitty (Marion Byron)— a hard task, considering her father and his are rivals in the river boat transportation business.

It is true that Keaton’s films often show his characters more comfortable with props and animals than other people; this is perhaps the largest reason why his characters feel otherworldly, as though he hailed from another dimension altogether and were perplexed by ordinary human interaction. Perhaps more than any of Keaton’s previous films, Steamboat Bill Jr. has Keaton interacting with other characters constantly, and they are some of the most interesting supporting characters in his oeuvre.

Keaton’s feature characters don’t often have families. With the exceptions of the aunt in Our Hospitality who warns him of the feud, the parents in Battling Butler who push him to “rough it” in the wilderness in order to become less dependent on luxury, and the doting mother in College (played by 1910s comedienne Florence Turner, no less!), most Keaton protagonists are loners looking for a place to call home or at least someone to share home with (often a love interest, sometimes a cow). Yet in Steamboat Bill Jr. unlike any other Keaton movie, the protagonist’s family is a source of conflict. In Keaton’s short work, Torrance may have been purely the heavy with his scowling face and towering build, but here that function is complicated: he is the bullying heavy, but he is also Willie’s perplexed father. Willie’s petite frame, stylish clothes, and enthusiastic ukulele-playing have the burly Bill fearing his son may be a wimp at best or a touch “purple under the collar” at worst. And while Willie’s relationship with Kitty may dispel the latter anxiety, his prime desire is to make Willie more of what he thinks a man ought to be. Being a son who wants to please the father he’s never known, Willie agrees to go along with it. 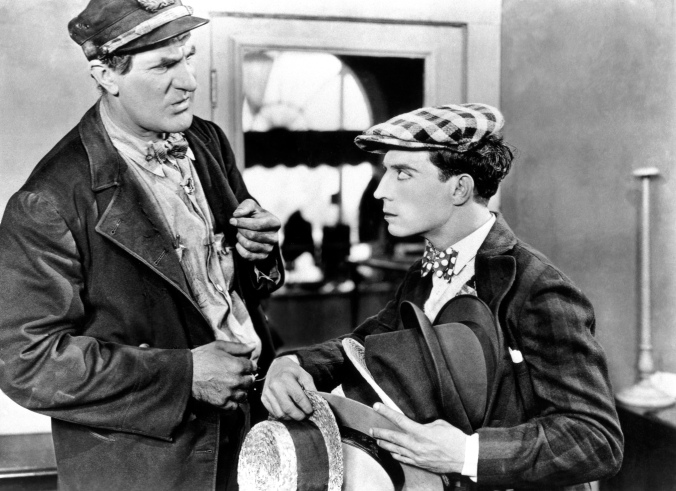 Irritated with his son’s college boy aesthetic, Bill Sr. takes Willie to the hat shop to try on a series of comically oversized hats. Of course, the scene is funny, what with the silly headwear and Buster’s attempts to look as dignified as possible in them, but the scene is hardly frivolous or throwaway. It serves an important narrative function: the main conflict of the film is father versus son, or perhaps more specifically, the father wanting to fashion his son into his own image. Yet the moment Bill Sr. is satisfied with a hat and the two Canfields leave the shop, the headwear is blown off of Willie’s head the moment they leave the shop. Already, we are shown through the visuals that Bill’s mission is a doomed one; Willie cannot be changed and, as we come to learn later, should not be.

And yet despite Bill’s distaste for his son being who he is, he is not presented as a terrible person or black-hatted villain. Indeed, Bill is protective of his son, knocking out any sailor who attempts to bully or beat up on Willie. And once his violent temper lands him in prison, he gains a newfound respect for his effete son’s resourcefulness in the hilarious and celebrated tools-in-bread sequence. Like Annabelle Lee in The General who so wanted Johnnie Gray to be a soldier, Bill Sr. discovers that there was nothing wrong with his son after all, he never needed to change himself to prove heroic. (Throughout the picture, Keaton and Torrance have such wonderful chemistry in general; it’s too bad they never shared the screen again. It could have livened up some of the dreadful projects MGM had in store for Keaton in the early 1930s.)

In the end, Willie more than proves himself, as Keaton’s heroes often do. Yes, he may not be physically intimidating or as willing to pick a fight, but he does manage to possess bravery, intelligence, and resourcefulness when he rescues Kitty and Bill from drowning. Willie is also forgiving. Both Bill and Kitty want Willie’s complete, unwavering loyalty to one or the other of them; both become angry when he fails to split ties with either of them. Rejected by both, Willie has no reason to stay in Mississippi, yet he sees his father in distress and stays to help him. After rescuing his father and his girl, all three reconcile and are allowed to live happily ever after.

Keaton’s last two truly Keaton-esque features, Steamboat Bill Jr. and The Cameraman, allow his protagonist to be more vulnerable in a way, put into situations where we see more of his emotional side in regards to human interactions. Not that he is cold or machine-like in his earlier features as some silent film aficionados have claimed: for me, his hurt and humiliation during the early scenes of The General, where Annabelle Lee rejects him, are moving— though Keaton does not keep you feeling sorry for his hero for long because dammit, we’ve got a train engine to save! But the intensified emotional qualities of these two films make them stand out, all culminating in that famously heartbreaking descent into the sand scene in The Cameraman. The father-son moments and romantic scenes in Steamboat Bill Jr. and much of The Cameraman are perfect illustrations of what film scholar Imogen Sara Smith means when she claims Keaton’s movie persona is like “Baked Alaska in reverse,” cool to the touch, warm at the center.

an ode to dust
tgreywolfe